As a second-generation memorial company owner, Don Calhoun’s life and career are closely intertwined with grief. Customers of Create A Legacy In Stone come to Don and his team “in their worst, darkest hours” to tell the stories of their late loved ones in everlasting stone.

It would be understandable if Calhoun struggled with the heavy nature of his work. But it’s in those moments, he says, that music is his escape.

“I believe that what I do for a living is sacred. I truly believe it was a calling, that I was meant to do this work,” he said. “But I can’t become weighed down by it. I can’t take it home with me. I’m meant to do it—but music is my muse.”

Calhoun worked for his father’s company, a precursor to Create A Legacy In Stone, from his early teenage years, but found himself drawn to music as a “simple escape” from the hardships his family faced at home.

When he was five years old, Calhoun’s mother was given months to live as a result of a malignant brain tumor that rendered her blind. In defiance of her odds, she lived to see Don attend Saint John’s University, but passed away during his college years.

“There were times that, you know, you’re young, you’re coming into adulthood and the world just sucks because your mother’s dying,” Calhoun said. “Then I happened to go into the business that is surrounded by death; I see it every day. Music was my release from the pressures of the world, the anxiety of the world, and I collected voraciously.” 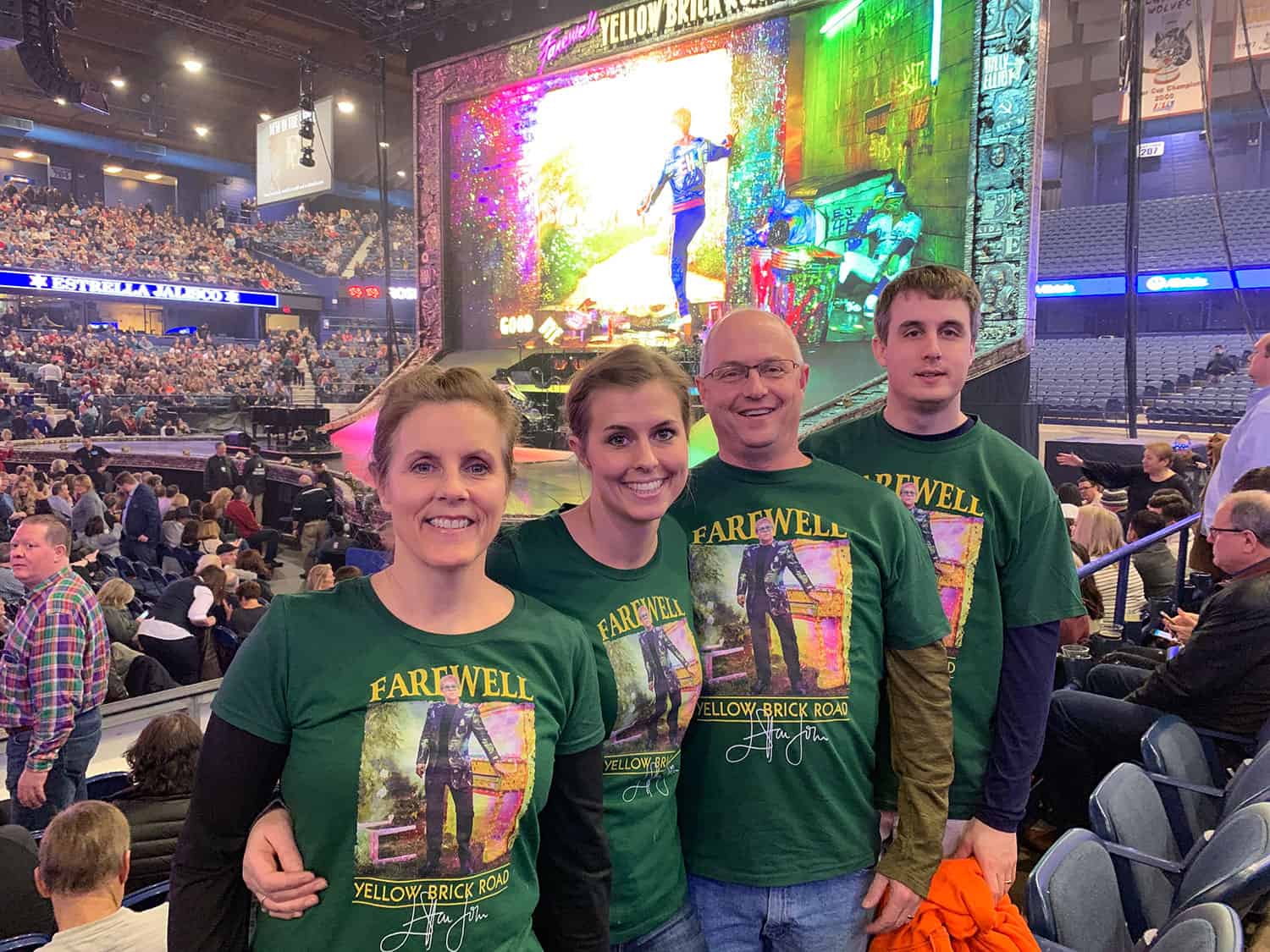 While Calhoun listens widely across genres and artists, he has a special connection to the life and music of Elton John. John’s music caught Calhoun at a particularly poignant moment in both their lives: Calhoun recalls a 1979 concert just after the singer came out as bisexual, a revelation that sent ripples of backlash through the music world at the time.

“He had a period where he was not very popular,” Calhoun recalled. “He played the Northrop Auditorium in Minneapolis with Ray Cooper. I had fourth row tickets. My mom died very shortly after. . . . It gets emotional for me to talk about. [Music] was the only bright sunshine in that dark period. I became fanatical after that towards Elton.”

“Before that I was a fan, but after that . . . everything the guy ever did, every deep record, everything else — I knew it, I had it.,” Calhoun laughed.

Calhoun has since seen the celebrated performer no less than 28 times and is happy to travel near and far to catch the star live. In his spare time, he’s passionate about passing on to others what John and many other musicians have offered him: Something to smile about.

“I love to share music with others. I started making my older brother cassette tapes of playlists… That started a tradition that’s been going on for over 20 years,” Calhoun said.

Each year, Calhoun produces a compilation album lovingly dubbed “CalRock.” In a detailed process that takes months, he curates and edits a unique playlist of music spanning decades and genres.

“I go from the 1940s and forward; I can’t just have greatest hits,” Calhoun said. “I have to introduce you to something you’ve never heard before, something you’ll find magical.”

By November 1st, the annual album is ready for release, but not before Calhoun writes his album notes-slash-newsletter that tends to clock in at more than 20 pages. When the holiday delivery reaches its audience — some 200 people and families in Calhoun’s circle and beyond — it’s shared among them with the same fervor inspired by a surprise Beyoncé drop, regardless of age or music preferences.

Ultimately, Calhoun says, his business and passion projects are linked by one distinctly human desire: A longing for shared experiences and genuine connection.

“If you’ve had loss in your life, you know that it’s sacred space. Anybody who lets you into their sacred space to give it honor, to give it compassion — that is huge,” Calhoun said. “It’s the same thing with music. [Artists] provide something no one else can provide, and it’s magical. Whether it’s a Van Gogh painting or a play, it’s such beauty, such joy. It makes you connected to something.”

Calhoun regularly reflects on the connections he’s made throughout his life in the memorial industry and through his love of music. Those connections, he said, are the legacy he hopes to leave behind.

“You know, in the old days, [a funeral] would have six pallbearers. I think if you live this life and leave it with six dear friends, people who know your soul, you have led a blessed life — because you connected with them,” he said. “If we can do that, that’s wealth beyond wealth.”